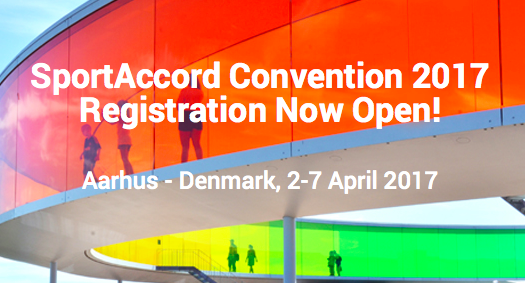 LAUSANNE, Switzerland – SportAccord Convention is pleased to reveal this year’s MediaAccord programme for SAC2017 with the underlying premise ‘No Sport is Too Big, Or Too Small’. This year’s conference sessions will consider the power of innovative thinking to transform opportunities no matter what size the sports discipline. MediaAccord will take place on Wednesday, 5 April from 14.00 – 17.30 at the Scandinavian Center in Aarhus, Denmark, this year’s European Capital of Culture.

Kicking off with the Interview of the Day, David Eades, Journalist and Anchor, BBC World will talk to Greg Stremlaw, Head of CBC Sports & General Manager, Olympics, who will share how CBC Sports redirected coverage of the Olympics and Olympians, moving to much more personality-driven content with regard to the athletes and building up their public profiles, so by the time the Olympic Games arrived, Canadians were highly familiar with the athletes and became more passionate in cheering for their success.

Commenting on CBC’s strategy, Greg Stremlaw said, “We saw this in both Sochi and in Rio, as the two most watched Olympic Games in Canadian history with 97% and 92% national reach for those events – unprecedented numbers in Canada.

“CBC Sports achieves these numbers by bringing fans closer to the athletes they admire through in-depth stories – often told by the athletes themselves, across multiple platforms, including: Road To The Olympic Games, hosted by Scott Russell and Andi Petrillo each weekend on CBC-TV; live streaming event coverage at cbcsports.ca and via the CBC Sports app; and through Off Guard, a new weekly podcast – a first for CBC Sports – hosted by Olympian and World Champion hurdler, Perdita Felicien, that goes beyond the scores and statistics, to reveal personal stories from some of the biggest names in high-performance sport.”

A panel session will follow moderated by Rachael Church, Director of Editorial and Communications, World Academy of Sport, entitled ‘Beauty and the Beast … or Happy Families?’ The panel will examine how sports can work with the media to deal with issues of governance and integrity, and consider both practical and more strategic ways of enhancing the relationships with the media to help to tell a better story about sport.

Panel Member, Mark Parkman, General Manager, Olympic Channel said, “Our relationship with each Olympic sport is at the core of the Olympic Channel’s output, and since our launch we have announced agreements with 40 Federations. We share a common goal to increase both the size of the audience and active participation for their sports, so it is important for us to work together in our collective efforts to promote their sports and to help grow their audiences worldwide. This includes creating and distributing as widely as possible relevant content that is appealing to our target audiences.”

Rachael Church will also moderate a further panel session entitled, ‘Ask the Experts’, with a selection of International Federations and media representatives, on what recent innovation is most likely to influence the sport/media relationship in the next year.

This year’s Event Watch in MediaAccord will focus on Aarhus who have been nominated as a European Capital of Culture for 2017. Media coverage of Aarhus has been widespread with thousands of articles in circulation, many from leading publications, conveying the passion, innovation and vibrancy of the city in the run-up to the event. Delegates will learn about the approach and how the media teams went about establishing good working relationships with the media during the lead-up to this coveted and major international event.

SportAccord Convention is a high profile gathering of key decision-makers focused on the business of sport. The 6-day Convention includes the Plenary Conference, LawAccord, City Forum, and City-to-City.

Follow developments and updates on SportAccord Convention on Twitter @saconvention using #SAC2017 or on our LinkedIn company page https://www.linkedin.com/company/sportaccord-convention

SportAccord Convention is the world’s premier and most exclusive annual event at the service of sport. It is focused on driving positive change internationally and dedicated to engaging and connecting; international sports federations, rights holders, organising committees, cities, press and media, businesses and other organisations involved in the development of sport. The Convention is host to annual general meetings of governing bodies as well as bid cities, and once again, will welcome a delegation from the International Olympic Committee.